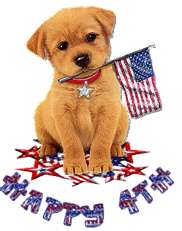 "America the Beautiful" was written as a poem by Katherine Lee Bates in 1893.  After she rode to the top of Colorado's Pike's Peak, she was inspired by the "spacious skies" and "purple mountain majesties."  Her poem was later set to music.

The Liberty Bell cracked the first time it was rung.  In 1846, it was repaired and cracked again.  The bell has not been rung since.  Every 4th of July the Liberty Bell is tapped...not actually rung.

The first Eagle on an American coin appeared on a Massachusetts penny in 1776.

A lucky person in Philadelphia bought a $4.00 picture at a flea market.  Behind the picture was an original 1776 printing of the Declaration of Independence.  It was sold to TV producer Norman Lear for 8.1 million dollars.

According to the Department of State.....
Red stands for hardiness and courage.
White is the symbol of purity and innocence.
Blue is the color of vigilance, perseverance and justice.

Posted by Nature Weaver Gypsy
Newer Post Older Post Home
"ALWAYS tell the truth, use kind words, keep your promises, giggle and laugh, stay happy and be positive, love one another, always be grateful, forgiveness is mandatory, give thanks for everything, try new things, say please and thank you, smile."