Three Irishmen, Paddy, Sean, and Seamus, were stumbling home from the pub late one night, and found themselves on a road which led past the old graveyard.

"What was his name?" asks Paddy.

Seamus stumbles around a bit, awkwardly lights a match to see what else is written on the stone marker, and exclaims, "Miles, from Dublin." 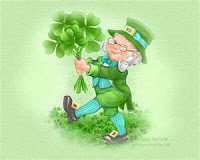 Leprechauns are cousins of the clurichauns, who are said to have inhabited Ireland before the Celts arrived there about 700 B.C.  They are a faerie folk, small enough to sit comfortably on your shoulder.  They dress to the 9's in suits with waist coats, hats and buckled shoes.

Leprechauns play tin whistles, fiddles, and other Irish musical instruments.  Many a night they have wild music sessions, known as Ceilis (pronounced KAY-lees), where they gather to dance, drink, and sing.  Their love for dancing puts them in constant need of shoes, and that's why leprechauns are cobblers, or shoemakers, by trade.

There's a story told of a woman who was stolen by the leprechauns and was returned seven years later.....with no toes....because she had danced them off!

Spotting a leprechaun brings good luck, but is far from easy.  Hearing the sound of their hammers is one way to learn where they are.  Every leprechaun has a hidden pot of gold.  If you're lucky enough to capture a leprechaun, he may tell you where his gold is just so he can get away.  Don't count on it, though.  Chances are more likely that if you look away, even for a split second, he'll vanish and be gone, quick as a wink.
Posted by Nature Weaver Gypsy
Newer Post Older Post Home
"ALWAYS tell the truth, use kind words, keep your promises, giggle and laugh, stay happy and be positive, love one another, always be grateful, forgiveness is mandatory, give thanks for everything, try new things, say please and thank you, smile."