I know only one thing about my great grandfather (my mother's grandfather).  He was an apiarist.....or, a beekeeper.  He tended to the bees that made honey.

How I wish I could sit down with him and listen to his stories. Something tells me he was a man of gentle, but brave, nature to be able to work with the bees.  I'd have so many questions.....Did your family in Europe raise bees?  Were you ever stung?  What did you wear when you worked with them?  Did you sell the honey?  What were some of great-gramma's recipes using your honey? 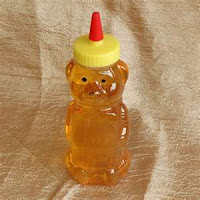 Honey is mentioned some 60 times in the Bible as a helpful medicine, a wholesome food, something to be added to delicious drinks, an appropriate gift, and a valued possession.  That's probably because it takes some 60,000 bees, traveling up to 55,000 miles, visiting more than two million flowers to gather enough nectar to make a pound of pure honey.  (Who wouldn't like to receive that cute plastic bear container of honey!)  In the 11th century, German citizens paid their property taxes with honey and beeswax.  That reminds me of the stories our grandparents told about the old country doctor who made house calls and got paid with chickens for his stew pot.

Sometimes we forget that for thousands of years honey was the primary source of sweetener before the production of sugar after the 1800's.  Before penicillin, honey was the most effective antibiotic treatment known to heal open wounds.

Modern-day scientists and doctors cannot dispute the findings of the Greek physician Hippocrates (460 BC - ca. 370 BC), the father of modern medicine who brought honey cures to our attention. It is the only natural substance capable of healing both internally and externally.  That's because honey contains unique enzymes that can only be introduced by the honey bee.  It's truly magical stuff.

In keeping with National Nutrition Month, our household has started a new regimen.  Honey butter is so simple to make.  Just stir honey into butter, using personal preference amounts.  After reading the health benefits of cinnamon, we're stirring a few shakes of cinnamon into our honey butter.  Slather that on a piece of warm toast or a toasted English muffin, and you've just created a delightful alternative to a cinnamon roll.

If we want to tend to our good health, pure honey is so easy to tuck into the foods we eat and liquids we drink.  Simply drizzle some into your cup of tea or coffee, or a cup of hot water with lemon juice.  Pure Honey is wonderful in sauces, marinades, on cereals, and on my favorite peanut butter and banana sandwiches.  In baking, some people replace the sugar ingredient with a ratio of 1 cup of sugar = 3/4 cup of honey.

Note:  If your honey crystallizes, or turns hard, simply place the honey jar in warm water and stir until the crystals dissolve.  I've read this is better than putting it in the microwave.  Honey is the only food in the world that won't spoil.

One word of caution:  Honey isn't for children under 2 years of age.  Honey may be harmful to their undeveloped immune systems.  I'm not a medical adviser...that's simply something I read and want to pass along.

A keeper of the bees, like my great-grandfather, once said.......

"There is no other field of animal husbandry like beekeeping.  It has appeal to the scientist, the nature lover, and the philosopher.  It is a chance to work with some of God's most  fascinating creatures, to spend time and work in the great outdoors.  It challenges my abilities, and I continue to learn.  My hope is that I never become so frail with old age that I cannot spend my days among the bees.  It gives credence to the old saw that 'the best things in life are free.'  I thank God daily for the opportunity and privilege to be a beekeeper."

Posted by Nature Weaver Gypsy
Newer Post Older Post Home
"ALWAYS tell the truth, use kind words, keep your promises, giggle and laugh, stay happy and be positive, love one another, always be grateful, forgiveness is mandatory, give thanks for everything, try new things, say please and thank you, smile."