A Day on the Mighty Mississippi

Twenty-four hours ago we were loading the boat with fishing poles, tackle box and cooler.  The temperature was October outstanding, so we decided to hit the road and head for The Mighty Mississippi. 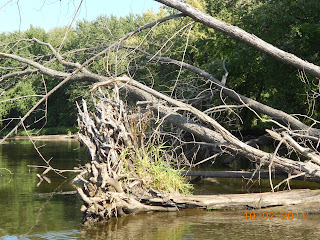 The waters of the Mighty M are low now, but we carefully squirmed our boat to back waters where we caught a nice bunch of bluegill and crappie.  Of course, our hooks and lines got snagged in the branches beneath the water, but that's one of the 'hangups' of fishing.  I just think it would have to be a hoot to see all the costly Cabela's lures dangling down there never to be used again! 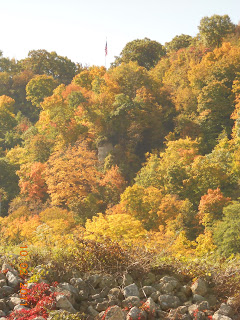 Our day on the river wasn't only about fishing. The flag reaching to the sky on top of this bluff speaks of public allegiance to America.  Not only does one see a sacred blend of the spiritual and the patriotic here, but feels it in the heart and soul.  It feels good....really good. 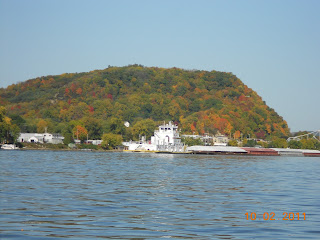 Two barges and their tugboats were on the channel, so we slowed down to watch them go under a bridge and around a sharp river turn.

I could never understand why we call them 'tugboats' when they push and maneuver.  But, I come to find that tugboats were originally used to help sailing ships get into and out of harbors when the wind was weak or in the wrong direction. In order to do this, they had to tug. 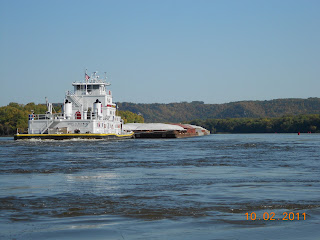 We here in the Midwest take water transportation for granted because we're used to seeing barges go up and down the river moving our grain.  We forget its energy-efficient impact on our economy and environment.  A single barge holds as much cargo as 15 rail cars or 60 semi trailer trucks.  Statistics show that one barge can move one ton of cargo 576 miles on a gallon of fuel, while a truck can only move that ton 155 miles on one gallon. 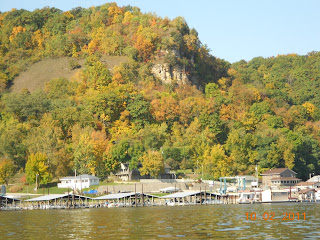 "The world has a thousand creeds, and never a one have I;
Not a church of my own, though a million spires are pointing the way on high.
But I float on the bosom of faith, that bears me along like a river.
And the lamp of my soul is alight with love for life, and the world, and the Giver."
~Ella Wheeler Wilcox
Posted by Nature Weaver Gypsy
Newer Post Older Post Home
"ALWAYS tell the truth, use kind words, keep your promises, giggle and laugh, stay happy and be positive, love one another, always be grateful, forgiveness is mandatory, give thanks for everything, try new things, say please and thank you, smile."