Has anyone seen the woolly bear caterpillars yet?  (I call them woollies.)  We usually see them crawling across the paved roads this time of year. Typically the furry bands at the ends of this caterpillar are black, and the band in the middle is brown or orange, giving it a distinctive striped appearance.

Long before we had meteorologists and all of their sophisticated technology, people depended on the sky, animals and nature to forecast the weather.  My generation heard the old-timers repeatedly talking about their weather predictions.......


The higher the clouds,
the finer the weather.
Clear Moon,
frost soon.
When clouds appear like towers,
the Earth is refreshed by frequent showers.
(When white clouds look like cauliflower or castles in the sky,
there's probably lots of motion going on inside.)
Rainbow in the morning
gives you fair warning.
(A rainbow in the morning says that a shower is west of us
and we will probably get it.)
Ring around the moon?
Rain real soon.
Rain foretold, long last.
Short notice, soon will pass.
(If you are toting an umbrella cuz it looks like rain,
the rain will stick around for several hours when it finally comes.
If you get caught in a surprise shower, it more than likely will be short-lived.)
Red sky at night, sailors' delight.
Red sky in morning, sailors take warning.
If it hasn't rained in a long time
and it rains before seven a.m.,
it will be over by eleven a.m..
If three nights dewless there be,
'twill rain, you're sure to see.
The bushier the squirrel's tail,
the harsher the winter will be.
The first twelve days after Christmas will indicate what each month in the next year will be like.  A mild day the day after Christmas means that January will be mild.  A stormy day on the fourth day after Christmas means that April be stormy, and so on.
If it rains on Easter Sunday, it will rain on the next seven Sundays.
If it starts raining on the first day of the full moon,
it will keep raining until the moon quarters.
There will be nice weather
if you hear a screech owl.
There will be nice weather if smoke rises.
When crickets sing,
the temperature will get warmer.
If the first snow stays on the ground for three days,
another snow will come along to add to it.
A late frost indicates a rough winter is ahead.
When the dew is on the grass,
Rain will never come to pass.
When grass is dry at morning light,
Look for rain before the night.
The faster the crickets chirp,
the warmer the temperature.
Thick husks on corn in the late fall
are signs of a very cold and bitter winter.
In winter, the loud, clear sound of a train whistle to the south foretells a thaw.
The reason is that a shift in wind direction from north to south is thought to
bring warmer temperatures.
Turtles crossing roadways means a dry spell is on the way.
The turtles are seeking a place where water is plentiful to tide them over.
Cows huddled together in the corner of a field
means a storm is brewing.
The higher the muskrat's den,
the warmer and wetter the winter.
Flies clustered on windows and screens
means a cold front is on its way.
Signs of an early and rough winter ahead......
Big spider webs
Thick hickory nut shells
Squirrels suddenly quit eating nuts and start storing them
Thick bark on trees
Whether these be folklore or fact, at least they coax us to observe what's going on around us and give us ways to challenge the high-tech skills of today's meteorologists.  I don't know how others feel, but I've never been overly impressed with a forecast that tells me there's a 50% chance of rain tomorrow. 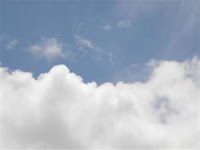 Ta-ta and keep your eye on the sky!  It just might be trying to tell us something.
Posted by Nature Weaver Gypsy
Newer Post Older Post Home
"ALWAYS tell the truth, use kind words, keep your promises, giggle and laugh, stay happy and be positive, love one another, always be grateful, forgiveness is mandatory, give thanks for everything, try new things, say please and thank you, smile."