Did you ever stop to think how many to-do lists you've written? 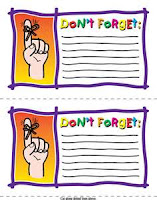 Before the Christmas holidays especially, my lists of things to do could stretch from one side of town to the other.  From experience, I know that if I don't write it down, it won't get done.  And, this problem is getting to be the norm.  My comfort comes from knowing that my friends are experiencing the same thing.

About an hour ago I wrote out a grocery list for my husband, as he volunteered to drive to a town 13 miles away to pick up groceries.  Lord only knows how many grocery lists I've written out in my life. If I roughly figure one grocery list per week, since we've been married that would figure to be about 2,288 lists.  That's not counting the lists we made out on days in between when one of us needed to stop at the store for only a few items.

We should not be embarrassed by having to make lists.  It's a sign of organized thinking.  Life in 2011 keeps distracting us with things like cell phones ringing or vibrating with text messages and phone calls.  Our brains can't stay on track when they're derailed by these interruptions.  There was a day when we did one thing at a time.  But, now we multi-task.  Right there we see a reason for reminders.

When we get together with our friends, we laugh when one of us is in the middle of telling a story when all of a sudden the story line vanishes.  There comes a pause......a long puzzling pause..........followed by...., "And, I have no idea what I was going to say......."  This brings laughter, because the rest of us know exactly what this feels like.

One of these days perhaps that unwanted dementia bug will stick his stinger into me, but I won't know it.  Others around me will.  The ball will be in my court, because the problem will be theirs.....not mine.  When this happens, I will start a new life of my own, filled with fantasies and visions that will belong only to me.  In a way, it becomes a whole new world, where the real-life hassles go away and we walk a few steps closer to heaven.

I'd write more, but I have no frickin' idea what I was going to write about.............
Posted by Nature Weaver Gypsy
Newer Post Older Post Home
"ALWAYS tell the truth, use kind words, keep your promises, giggle and laugh, stay happy and be positive, love one another, always be grateful, forgiveness is mandatory, give thanks for everything, try new things, say please and thank you, smile."