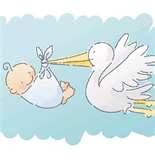 This morning I'm thrilled to announce that a Baby Alert has been issued!  Last evening we received an email sharing that our dear friends are about to be grandparents for the second time.  They have one little granddaughter now.  When that little girl was told she was going to have either a brother or sister, she was asked first if she'd like a little sister.  She said, No.  Then her parents asked if she'd like a little brother.  She said, No.  She said she wants a rabbit.

Congratulations to the grandparents-to-be, to the parents to-be, to the uncle-to-be.  Whether it's a boy or it's a girl, we know that little girl #1 will be a good helper.  Either that, or the parents may find baby #2 in a bunny cage!!!!!!

I'm up fairly early this morning.  The eastern sky is a dreamy pink right now.

We went out for lunch yesterday after running our weekly errands.  Have you noticed that buffets have started charging extra for beverages?  We have been regulars at this restaurant, and yesterday's bill was noticeably higher for a noon lunch.  Not only did the price of the buffet go up, but now they charge extra for tea.  Wonder at what point we'll have to start paying for a glass of water.  When that happens, you'll be seeing me wearing a flask around my neck.

Yesterday we visited a new yarn shop in town.  Such beautiful textures and colors.  All so classy compared to the plain old ordinary Red Heart acrylic yarn that I buy.  The lady working with the yarn showed us yarn that's made out of sugar cane.  It was so incredibly soft.  I almost bought a skein.  The reason I didn't buy it was because of the promise I made myself to use up all the yarn that I already have before bringing home some more.  Sometimes a person has to put the skids on.

Winter gets me all enthused for working with yarns and fabrics.  I'll be getting out my loom and weaving rugs soon.  Seems all my hobbies fell to the wayside when I was dealing with hip replacement.  But, now that I'm feeling like my old self, I'll be poking my head in my hobby closet, bringing out projects to either finish or start.

It's too early in the day to say what we'll be doing today.  The gypsy blood in me feels the urge to hit the road.  It doesn't take too much of a suggestion to put us on the road.  I'll just bet if I would do a family history, both our lines of ancestry would contain drops of Columbus blood. As I look out the window, however, the sky has already gone from that dreamy pink to gloomy gray.  Hmmmm.  Maybe we'll stay home.  I hear the upstairs floor boards squeaking, so my guy is on his way downstairs.  I'll see what he thinks.

Today's Quote:   If your baby is 'beautiful and perfect, never cries or fusses, sleeps on schedule and burps on demand, an angel all the time,' you're the grandma.  -Theresa Bloomingdale
Posted by Nature Weaver Gypsy
Newer Post Older Post Home
"ALWAYS tell the truth, use kind words, keep your promises, giggle and laugh, stay happy and be positive, love one another, always be grateful, forgiveness is mandatory, give thanks for everything, try new things, say please and thank you, smile."