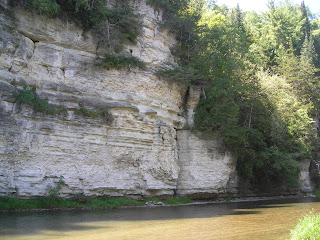 These magnificent limestone bluffs are within a modest driving distance of our home.  Their beauty never ceases to inspire us, and the river that wraps itself closely beside them is a hot spot for canoers,  kayakers and tubers. This spot is perfect for water therapy, as I like to call it. North-facing bluffs and cool air currents from underground  caves make these areas more like the north woods than the state in which they are located.  What is really spectacular is the stand of balsam fir trees reminiscent of a geological interval of warmer global average temperatures that separated glacial periods within an ice age thousands of years ago.
Glacier ice is the largest reservoir of fresh water on Earth, and is second only to oceans that are the largest reservoir of total water.  Glaciers are found on every continent, even Australia, and cover about 3% of the earth's surface.
We've never traveled to see a glacier but always thought it'd be something one should see.  Just imagine those huge masses of ice moving very slowly, taking a year to move as far as one can walk in a few minutes.
Today one can scarcely open a newspaper or tune in to a news channel without hearing the words "global warming."  Is it for real?  Europeans get more upset about climate change than we do, but there's good reason.  They watch the sobering reality.  In the Alps, home to the world famous Matterhorn, nearly half the glaciers have disappeared since record keeping began.  The Alps, often referred to as the "water tower" of Europe, contains 40% of Europe's fresh water supply.  The significant disappearance of ice on the Matterhorn has prompted the need for the border between Switzerland and Italy to be redrawn.  Isn't that interesting.
The receding Muir glacier in Alaska is causing scientists now to warn of more earthquakes, triggered by tectonic plates with suddenly lightened loads.  The Himalayan glaciers are losing 3 feet in thickness per year.  The Chinese government officials are growing concerned that retreating ice may spell the end of reliable water supplies for China.  Greenland's Helheim Glacier is retreating at an average rate of 110 feet per day.  The famous icecap, Mt. Kilimanjaro, has diminished more than 85% since 1912.  Mount Kenya has lost nearly ALL of its ice at an average of 1 meter per year, threatening water supplies for millions of people.  Scientists are now saying that the great African glaciers could be gone within 20 years.
In South America, the Chacaltaya glacier has completely vanished.  It was once the highest ski resort on earth.  Researchers believe that by the year 2030, the vast majority of ice in Glacier National Park will be gone unless current climate patterns are reversed.  Montana may have to think of a new name for its famous park.
All of this saddens me.  Are we humans to blame?  Are we going overboard with our intelligence?  Who knows.  Sure isn't up to me to be the judge.  But, we can privately lay claim to our own solutions and point fingers at who we think is to blame.  I guess when I see Mother Nature crying her frozen tears, it can't help but make me really sad.
This morning the temperatures have dropped quite a bit, and today we're trying to decide which sweatshirt to bring out from storage.  Yup, there's a gorgeous brisk breeze, and the trees are so happy they're waving their branches every which way.  Sky is blue with puffy white clouds.  The kind that scatter and keep forming images for our imaginations to play with.
Today's Trivia:  If you plug your nose, you can't hum.
Posted by Nature Weaver Gypsy
Newer Post Older Post Home
"ALWAYS tell the truth, use kind words, keep your promises, giggle and laugh, stay happy and be positive, love one another, always be grateful, forgiveness is mandatory, give thanks for everything, try new things, say please and thank you, smile."