Condensed Timeline of the Olympic Games

Olympic records go as far back in Ancient Greece as 776 BC, but the Games had been held for several centuries before that.  The Games originally consisted of foot races.  Gradually other events were added, starting with wrestling and the pentathlon, the 5-contest event.

AD. 394   Roman Emperor abolished the Games as part of the reform against pagan practices.

1896   The first modern Olympic Games were held in Athens, Greece.  245 men represented 14 countries in 43 events.  No women competed, because it was felt that would be 'impractical, uninteresting, unaesthetic, and incorrect.'

1900   The second modern Games were held in Paris, France.  1,319 men from 26 countries competed in 75 events.  Eleven women were allowed to compete in lawn tennis and golf.

1908   The 1906 eruption of Mt. Vesuvius required the Games be moved from Rome to London.  For the first time, athletes marched into the stadium behind their national flags.  More than 2,000 competitors participated in more than 100 events.

1912   Games held in Stockholm, Sweden.  For the first time, women competed in swimming events.  None of them were from the United States, because the US barred its female athletes from competing in events without long skirts.

1920   The Olympic flag and the Olympic Oath were introduced for the first time at Antwerp, Belgium.  Germany, Austria, Bulgaria, Hungary, and Turkey were not invited for having been on the wrong side of the Great War.

1924   The first Winter Olympic Games were called 'The International Winter Sports Week' and went on for 11 days in the French Alps.
1924 Summer Games took place in Paris.  Germany was still banned, but the other nations banned in 1920 were back in the Games. 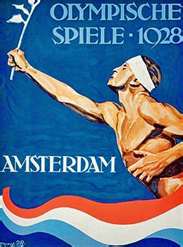 Summer 1928 Games were held in Amsterdam.  The Olympic Flame was introduced.  Germany returned to participate.  Women competed for the first time in track and field events, but so many of them collapsed at the end of the 800-meter race that the event was banned until 1960.

1936  - Winter Olympic Games were held in neighboring villages in German's Bavarian Alps and included Alpine skiing for the first time.
Summer 1936 Games held in Berlin, Germany,  the first-ever relay of the Olympic Torch.  The Games were the first to be televised and were shown on large screens around Berlin.

Winter 1948 Games were held in St. Moritz, Switzerland, because that city was untouched by the war.  Men and women each had three alpine skiing events.
The 1948 Summer Games were held in London and were the first Games to be shown on home television.  Germany and Japan were not invited to attend.

Winter 1952 - held in Oslo Norway.  The Olympic Torch was lit in the fireplace of skier Sondre Norheim and was relayed by 94 skiers to the Games in Oslo.
At the 1952 Summer Games in Helsinki, Finland, Russian athletes participated for the first time in forty years.

Winter 1960 - Squaw Valley, California.  The only winter Games ever that did not include bobsledding,  The organizing committee refused to build an expensive bobsled run if only nine nations would compete.  Walt Disney was in charge of the pageantry, including the Opening and Closing Ceremonies.
Summer 1960 Games held in Rome, Italy, were the first Summer Games covered by worldwide television.  A record of 5,348 athletes competed from 83 countries.

Winter 1964 - Innsbruck, Austria.  Weather conditions required the Austrian army to carry ice and snow from higher elevations.  Because of its political position, South Africa was barred from the Olympics.  It wouldn't be invited back until 1992.
Tokyo, Japan, spent approximately $3 billion to rebuild Tokyo for the Summer 1964 Games.  Tokyo had been devastated by earthquakes and World War II bombings.  Japan's worldwide image got a significant boost by these Games.

Winter 1968 - Grenoble, France.  East and West Germany compete on separate teams for the first time.  Drug tests are introduced.
Summer 1968 - Mexico City Games were controversially held at the highest altitude ever, 7,349 feet.  The thin air was considered harmful for athletes in endurance events, but it led to records in short races, relays, and jumping events.

Winter 1972 - Sapporo, Japan Winter Games were controversial.  The US, the Soviet Union, and others had been circumventing the IOC's Amateur Code for decades, with no consequences.  The Soviets had been paying their athletes for jobs they never actually performed, while Americans were handing out athletic scholarships to thousands of athletes.  Canada boycotted the Games in protest of  'state amateurs.'
Summer 1972 - Munich, Germany.  The Olympic Oath was taken by a Referee for the first time.

Winter 1976 - The Games held in Innsbruck, Austria, were originally planned for Denver, but Colorado residents voted against spending money on them.  Ice dancing made its debut.
Summer 1976 -  The original estimated cost of the Montreal, Canada Games had been $310 million, but because of labor problems, financial mismanagement, the building of an extravagant stadium, increased security and other expenses,  the cost soared above $1.5 billion.  Canada barred the Republic of China (Taiwan) team from their country, but then agreed to let them enter if they agreed not to compete as The Republic of China.  The Taiwanese considered this unacceptable and withdrew from the Montreal Games.  Dozens of other nations boycotted the Games.

Winter 1980 - Lake Placid, New York used artificial snow for the first time.
Summer 1980 - The first Games to be held in a communist country, Moscow, Russia.  Because of the Soviet invasion of Afghanistan, US President Carter called upon the US Olympic Committee to boycott the Games.    The Americans stayed home, and many other countries followed their lead.  Only 80 nations participated in the Games, down from 122 at Munich.

1981 - International sports federations were given the right to determine which athletes may compete.  While athletes must live up to the standards set by the Olympic Charter, the door was opened for nations to admit professional athletes.  Athletes were, however, still barred from receiving money during the Games.
1983 - The IOC voted to open the Games up to corporate sponsorship.

Winter 1984 - Games held for the first time in a socialist country, Sarajevo, Yugoslavia.  49 nations attended.
Summer 1984 - Los Angeles, California.  In retaliation for the US-led boycott of 1980, the Soviet Union led a 14-country boycott, citing security concerns for their reasoning.  These were the second Games to turn a profit--$215 million--the first was in 1932 at the Los Angeles Games.  The right to be part of the torch relay was sold for $3,000 a kilometer (a little over a half mile), against Greek protests, but the $11 million raised went to local youth groups.  140 nations showed up, but not the Soviets and East Germans.

1986 - The  IOC voted to change the schedule of the Olympics.  Summer Games and Winter Games will thereafter take place two years apart from one another, instead of in the same year.

Winter 1988 Games in Calgary, Canada were spread over 16 days for the first time.  Jamaica entered its first bobsled team.
Summer 1988 Seoul, Korea.  North Korea refused to participate, as did Cuba and Ethiopia.  There were no widespread boycotts for the first time since 1972.  159 nations sent 9,465 athletes, including 2,186 women.

Winter 1992 Games in Albertville, France.  Germany was reunited, and the Soviet Union broke up.
Summer 1992 Barcelona, Spain Games, the first time in decades every single nation with an Olympic Committee showed up, even Cuba, North Korea, and South Africa.  A record of 172 nations participated, represented by 10,563 athletes.

The Winter 1994 Games held in  Lillehammer, Norway, were the only Winter Games to take place two years after the preceding ones.
Summer 1996 - Atlanta, Georgia.  179 nations participated.  A pipe bomb in Centennial Olympic Park killed one person and injured 111.  Despite this, the Games continued.

Winter 1998 - A record of 2,177 athletes from 72 countries participated.  Snowboarding, curling, and women's ice hockey were introduced.

Summer 2000 - Sydney, Australia.  10,651 athletes (4,069 women) from 199 nations participated.  The only nation excluded was Afghanistan.  North and South Korea entered the stadium under one flag.  There were 165 events for men, 135 for women, and 12 mixed events.  Women were excluded from boxing and baseball.  Men were excluded from synchronized swimming, rhythmic gymnastics, and softball.

The 2002 Winter Games held in Salt Lake City, Utah, were problematic.  Several IOC members inappropriately accepted large gifts in exchange for voting to hold the Games in Salt Lake City.  The IOC pledged to change the way host cities are chosen.  The United States included in the Opening Ceremony a flag that had been at Ground Zero in NY.  Many saw this as contrary to the Olympic spirit.  Doping scandals caused disqualifications.

Summer 2004 the Games returned to Greece.  Participation records were broken, with 201 nations and 10,625 athletes taking part in 301 different events.

2005 - At the Singapore meeting, IOC decided to eliminate baseball and softball from the 2012 Olympics, the first sports to be dropped since polo in 1936.

2006 Winter Olympics at Torino, Italy, was opened with the Olympic flag carried by women.

2008 Beijing, China Summer Games.  Concern about Beijing hosting the Games due to China's economic and military connections. Air pollution in Beijing was at least two to three times higher than levels considered safe by the World Health Organization.  Medical research by the IOC showed that air pollution would put athletes at risk and affect their performance.  The Olympic Torch was carried by climbers to the roof of the world, reaching 29,035-foot summit of mount Everest.  During the ascent, Tibetan women were the first and the last to carry the Torch.

2012 London, England Summer Olympics, where at least 10,500 athletes are gathered from 205 countries.  An estimated 8 million tickets were available for purchase.  The Royal Mint made 4,700 medals for the events.


"The most important thing in the Olympic Games
is not winning, but taking part.
The essential thing in life is not conquering,
but fighting well."
~Pierre de Coubertin
(French Educator primarily responsible
for the revival of the Olympic Games in 1894)
Posted by Nature Weaver Gypsy
Newer Post Older Post Home
"ALWAYS tell the truth, use kind words, keep your promises, giggle and laugh, stay happy and be positive, love one another, always be grateful, forgiveness is mandatory, give thanks for everything, try new things, say please and thank you, smile."