Doesn't the style of this old corn crib look a lot like the gypsy wagon? 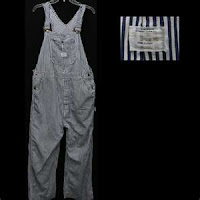 We had a corn crib on our farm when I was a little girl, but it was a whole lot bigger than this one.  Farmers had some colorful stories to tell about when they worked in these cribs.  It wasn't uncommon for a rat to run up a farmer's pant leg.  Back in those days, farmers wore OshKosh bib overalls, blue or thin striped.  Daddy wore these pin striped ones.

The first mention of a corn crib was in a 1701 almanac.  These open-slatted buildings were used to store and dry ears of corn. This particular style of corn crib, with slanted side walls was common by the 1860s.  The overhanging eaves and slanted side walls helped prevent the rain from splashing inside onto the corn.

Small farms back in the 1950s had separate buildings for separate parts of the farming operation.  We had a two-story large barn.  The cows were milked on the bottom level, and the hay was stored on the top level.  The bottom of our barn was made of local limestone, like the old house we lived in until I was 8 years old.  The top was made of wood and painted red.  The family barn still stands and is still used.  I'd guess it was built around 1900.

My other favorite small limestone structure was our spring house.  The bottom is where our fresh spring water came out of the ground and where we stored our cans of milk.  The top level is where we separated the cream from the milk with a separator.  It's also where daddy skinned squirrels and rabbits.  He had a board tacked onto the wall with nails that held the hides when he cleaned these animals for the dinner table.  I'd stand beside him when he did this, and we'd talk.  Just him and me.

The brooder house is where the baby chickens first went when we bought them at the hatchery.  They'd be itty-bitty yellow puff balls, and we'd put heat lamps over them to keep 'em warm.  The chicken coop is where the chicken hens and roosters lived, and where the eggs were laid.

The granary was where the ground grain was stored, and another good place to get attacked by a rat or mouse.  I grew up with these critters, so I am not afraid of them like most women are.  I'm not saying I want a rat in the house with me, but I don't go berserk when I see one.

Then there was the hog house and the hog pen where the pigs lived.  The hog floor, where they ate, was cemented.  We had a smaller hog house that was partitioned off into separate spaces, and that's where the sows had their babies.  If there was a runt in the litter, daddy would bring it into the house.  Mom would turn the oven on low, open the oven door where the piggy would lay on one of our bath towels.

Our house was routinely turned into an animal shelter.  The best time, I think, was when orphaned triplet lambs were carried into the house.  Migod, I almost went crazy, they were so soft and cuddly and needing love. I remember holding them in my arms like a real baby, wrapped in towels.  These little sheepoes stayed living with us until they outgrew their big cardboard box and we'd hear their little hoofies click click click on the linoleum.  Then daddy took them outside to one of the buildings to go it on their own.  I wanted to move out to be with them, but mom and daddy thought otherwise.  We farm kids learned early the heartache of being separated from our animal pets.

When one grows up on a farm, one is more likely to be impressed by little buildings like this corn crib.  They're reminders of our growing up years and bring back memories that are comforting to us.  Farming has changed.  It's grown to be big industry....big bucks.  Our family of four made a living by milking 20 cows by hand two times a day.  Now it's not uncommon for a big set-up to milk 500-600 cows three times a day.  We gave our animals one-on-one love and care  We called them by name cuz they were part of our family, working together for day-to-day survival.  I still remember the names of my brother's first Brown Swiss cows.....Polly, Molly, Holly, Dolly, Trolley, and Merily.

Funny how one corn crib can rake up so many memories.  I'd best stop here.
Posted by Nature Weaver Gypsy
Newer Post Older Post Home
"ALWAYS tell the truth, use kind words, keep your promises, giggle and laugh, stay happy and be positive, love one another, always be grateful, forgiveness is mandatory, give thanks for everything, try new things, say please and thank you, smile."