Leave it to my sister-in-law on hubby's side.  She's a creative one, always making things and giving them to others. 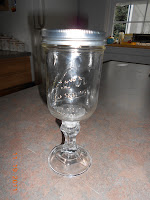 Yesterday she gifted us with two Red Neck Wine Glasses.  She took a Kerr pint jar and, with a type of Super Glue, attached it to a glass candle holder.  Talk about conversation pieces!

Tonight I intend to initiate my new wine glass with one of the three bottles included in our gift basket.....Chardonnay, Cranberry, or St. Croix Grape.

After a bit of looking, I learned that the oldest known bottle of wine was found in Speyer, Germany, when excavation workers uncovered it in a vineyard back in 1867.  It was inside one of two Roman stone burial containers that were dug up.  The bottle dates back to around 325 A.D.  Its greenish-yellow glass has handles shaped like dolphins.  It was one of several bottles found, but is the only one with the contents still preserved.

The ancient wine has quite a bit of silty sediment, about 2/3rds a thick, hazy mixture.  This is most probably olive oil, which the Romans commonly used to 'float' on top of wine to keep it from deteriorating.  Although corks were known to exist at the time, they were uncommon.  This method of oil preservation was apparently effective enough to keep the wine from evaporation even up to modern day.

If you're ever in Speyer, Germany, the bottle is on display at the Historisches Museum der Pfaltz.
Posted by Nature Weaver Gypsy
Newer Post Older Post Home
"ALWAYS tell the truth, use kind words, keep your promises, giggle and laugh, stay happy and be positive, love one another, always be grateful, forgiveness is mandatory, give thanks for everything, try new things, say please and thank you, smile."