A few years back, a young gal and her 8-year-old son moved into our neighborhood.  They joined a young man who was living solo.  I remember it was in the fall, because the little guy was rolling around in the leaves that had fallen on our lawn.  Hubby asked him one day where he was from.  "Alaska," he spouted.  Hubby asked him why he and his mother decided to move to our town. The look on the little guy's face was comically quizzical.  "Well, my mom went to 'cowboys.com' and found us a boyfriend!

The Internet has opened the dating scene up for us to find our soul mate anywhere on the planet.  Of course, I'm one who would be skeptical to believe and trust, but that's because my faith in humanity has been challenged throughout the years.  For the younger crowd, online dating is where it's at and how it's done. 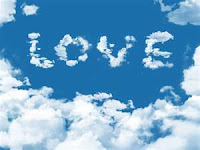 I'm not going to knock online romance, anymore than I would knock a face-to-face romance.  It's a whole lot easier to express ourselves to someone from the keyboard than actually being together.  There's a natural tendency to open up more, and to type things that we may not otherwise share about ourselves.  Maybe it's that very openness that is lacking in our old way of searching for the person who completes us.  Like everything else, though, we have to be smart and careful we don't get duped by deceptions that can mislead and misrepresent.

Just think.....it is possible for us to reach across the ocean and touch some one's heart and for that person to reach back and touch ours.  How inconceivable is that.  My generation's way of dating obligated the frightened boy to ask the frightened girl out for a date.  After he asked her and she accepted, she got rattled and broke out in pimples worrying about what to wear, and both of them suffered their individual gender hangups.  Nervous and giddy would pretty much describe how I acted on a date back in the '60s.

Cyberspace romance is the new way of finding love. And, very successfully sometimes.  In many ways it beats hanging around in a bar waiting for that hot dude to push himself through the swinging doors like Clint Eastwood did in the movies.

While growing up, my life margins were tiny, but I gradually pushed them outward as I tried new things and went to new places.  When I think of my gramma, her margins really never got any bigger than the family farm.  It's where she had her babies, where she raised them, where she tended to her garden and her chickens and ducks and geese, and only once in awhile she went along with grampa to town. She wrote letters with pencil and paper to communicate with friends and relatives and waited weeks for an answer. That was only 50 years ago.

No one will ever know how much I'd like to have my gramma's email address in Heaven.  I'd tell her about all the neat things going on down here now.  She'd love to know what my home is like, who I married, and all about me. Most of all, she'd be amazed by the modern way her great grand-children stay in touch with their friends and can meet new ones.
Posted by Nature Weaver Gypsy
Newer Post Older Post Home
"ALWAYS tell the truth, use kind words, keep your promises, giggle and laugh, stay happy and be positive, love one another, always be grateful, forgiveness is mandatory, give thanks for everything, try new things, say please and thank you, smile."